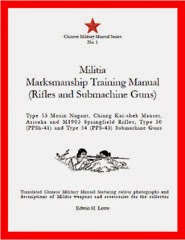 Review by Roger A. Finzel
"This book is the beginning of more than just new revelations into Chinese military preparation, arms production and use. In addition to translating The Official Chinese Militia Marksmanship Training Manual (fascinating) Edwin Lowe includes information of interest to students of Chinese modern military preparation and history. New information pops up on every page. The color photos illuminate his concise and clearly written commentaries. The descriptions of the militia organization, gun accessories, ammunition identification and Militia badges foreshadows additional information forthcoming in his soon to be published book, 'Everyone a Solider! The Chinese Militia 1958-1984'. Everyone wondering where the new China came from will be rewarded with original information and insights into this formative period of Modern Chinese history. This book is the first step that Edwin Lowe is providing in an area ignored for far too long."

Review by Bob 'Tex' Hanes
"...it is outstanding and recommend it highly if you have any interest in the Weapons of the PLA... it is a great work and will fill a space in my library."

"In the way of translations, each has its fierce partisans, and no one is more aware of that fact than Edwin Lowe, whose lovingly curated edition of the Jackson translation of The Water Margin is now published in plump, gorgeous paperback by Tuttle Publishing.".

"...and in his introduction to the present volume, Lowe strikes  winning note of self-deprecation..."


"Lowe has taken Jackson’s massive and still-enjoyable work, somewhat forensically assessed its strengths and weaknesses….. and produced a seamlessly updated and improved version of somebody else’s work. This is the very heart and essence of that Chinese literary tradition of editorship, and its service to that literary tradition is manifest: great old translations shouldn’t be forgotten in the rush for novelty. Wise on Lowe’s part to see this, and applause-worthy of Tuttle to give the final product such a lovely physical rendition. "


Review by Powell's Books
"This edition of the classic J. H. Jackson translation features a new preface and introduction by Edwin Lowe, which gives the history of the book and puts the story into perspective for modern readers. First translated into English by Pearl S. Buck in 1933 as All Men Are Brothers, the original edition of the J.H. Jackson translation appeared under the title The Water Margin in 1937. In this updated edition, Edwin Lowe addresses many of the shortcomings found in the original J.H. Jackson translation, and replaces the original grit and flavor of Shuihui Zhuan found in Chinese versions, including the sexual seduction, explicit descriptions of brutality and barbarity, and the profane voices of the thieving, scheming, drinking, fighting, pimping lower classes of Song Dynasty China. Similarly, the Chinese deities, Bodhisattvas, gods and demons have reclaimed their true names, as has the lecherous, over-sexed and ill-fated Ximen Qing. All of which was sanitized out when first published in 1937."

The Chinese Martial Code: The Art of War of Sun Tzu, The Precepts of War by Sima Rangju, Wu Zi on the Art of War (Bilingual Edition). A.L. Sadler and Edwin H. Lowe (Tuttle Publishing 2009).

Review by Jaredd Wilson at the Martial Thoughts blog
"In the interest of fuIll disclosure, I received this book from the publisher for review purposes

I'm familiar enough with Sun Tzu's the Art of War, and in fact have owned 6 or 7 copies of different translations with and without annotation. Everyone who is in martial arts has probably heard of the book, and gotten some pieces of the "fortune cookie" wisdom that is in the book. That is a disservice to Art of War. This book does a couple of things different. First off it includes other strategies of War books, and it includes an overall idea of how Art of War fit into the Chinese thought patterns of government then and now. It also makes some compelling arguments on why these texts are in fact MORE relevant now than in anytime in recent history.

Content
This book contains the Chinese and English translation of three books of Chinese military thought as well as two lengthy introduction chapters which I'll get to in a minute. The Art of War by Sun Tzu should be a big enough name that I shouldn't have to talk about that one much. The other two were new to me. The Precepts of War by Sima Rangju and Wu Zi On the Art of War were included to develop a more complete idea of the thought patterns going on at this time in Ancient China. The first introduction chapter was divided into sections. The author argues the relevance of these books in today's post-modern military world. He makes an excellent point, but I'll let the reader come to their own conclusions. The second part of the first introduction goes through the three classics and describes the histories and stories of the men who wrote them. The second introduction chapter dealt with the story of A. L. Sadler, an Australian Professor who probably did the second translation of Art of War into English, and probably the first of the other two classics.

Pros
To be honest, I've read Art of War in numerous incarnations, so that wasn't as big of a draw to me. What I found really interesting was the introduction chapters. I enjoyed the argument of why a world with a post-modern military force would to understand the thoughts on combat of a Chinese general from a couple millennia ago. They make the argument that today's wars are not being fought over power and territory, as they have been in the Western World for the last thousand years, but are being fought over differences of ideology which is actually closer to the more tribal military that was in place during Sun Tzu's time. It also explained to me, how War and warcraft is part of the continuum of statecraft. How war is a tool of the state. If any of the other versions of Art of War had explicitly said that, I missed it completely. In that way it was an epiphany of a sort. I'll definitely look at global conflicts in a new light as part of reading this book.
I also enjoyed the history of the the original author, A. L. Sadler. I always figured that since the West has had contact with China for such a long time (been watching Marco Polo on Netflix) that we've had some translation of Art of War around for a long time. It surprised me that the first translation into English came in the 1900's, with Sadler's being the second and more influential translation coming in 1944 due to the war with the Japanese.
The translations of the three classics are well done, and because I've never read the second two books I got a lot out of them, but to me, they kinda took a backseat to the arguments and history of the introduction chapters.

Cons
I really don't have any cons for this book. There is nothing I would add, subtract, or change. The book is dense with information. It's not a before bed read, but again, that's not what it's intended for.

Conclusion
Although the translations were done over half a century ago, the language is still very appropriate, and doesn't seem to try to add to flowery prose, except what is naturally in the original writings themselves. I've had versions of Art of War where they try to modernize the meaning of the phrases, and it looses some of its timeless qualities because of that. As I stated, I learned a lot and had a change in my view of the world. What more could you ask for in a book? For that, and the other reasons I listed above, I'm going to give this book (the first that I can think of) a full 5 out of 5 Ninja Stars. It's not just another translation of Art of War. Rather that just say "Everyone reads Art of War, so it must be important" it takes the time to explain how and why it is important. Mr. Lowe obviously has a large amount of respect for both the original authors of the classics, and for the translation done by Mr. Sadler."