New Publication: The Free Mind: Essays and Poems in Honour of Barry Spurr 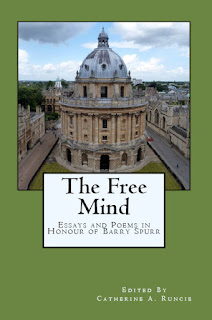 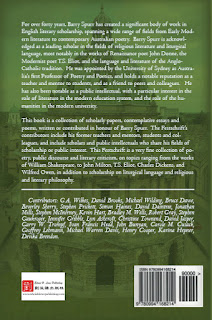 The Free Mind:  Essays and Poems in Honour of Barry Spurr

For over forty years, Barry Spurr has created a significant body of work in English literary scholarship, spanning a wide range of fields from Early Modern literature to contemporary Australian poetry. Barry Spurr is acknowledged as a leading scholar in the fields of religious literature and liturgical language, most notably in the works of Renaissance poet John Donne, the Modernist poet T.S. Eliot, and the language and literature of the Anglo-Catholic tradition. He was appointed by the University of Sydney as Australia's first Professor of Poetry and Poetics, and holds a notable reputation as a teacher and mentor to students, and as a friend to peers and colleagues. He has also been notable as a public intellectual, with a particular interest in the role of literature in the modern education system, and the role of the humanities in the modern university.

This book is a collection of scholarly papers, contemplative essays and poems, written or contributed in honour of Barry Spurr. The Festschrift's contributors include his former teachers and mentors, his students and colleagues, and includes scholars and public intellectuals in his fields of scholarship or public interest. This Festschrift is a very fine collection of poetry, public discourse and literary criticism, on topics ranging from the works of William Shakespeare, to John Milton, T.S. Eliot, Charles Dickens, and Wilfred Owen, in addition to scholarship on liturgical language and religious and literary philosophy.

Stephen Prickett -  Why Study the Humanities?

Simon Haines - On Professing Poetry in Australia in the 21st Century

David Daintree - "Pour forth thy fervours for a healthful mind": Pagan and Christian Views of Courage


Jonathan Mills - State of the Arts

Stephen McInerney - Four Sonnets - 'The Back Window, Kiama', 'How Calm The Harbour', 'A Short Walk At Dusk, Forest of Dean', 'Were The Window Frosted'

Stephen Gaukroger - Knowing Oneself and the Aesthetic Shaping of Character: German Romantic Anthropology

Jennifer Gribble - Do Not Forget: Memory and Moral Obligation in Little Dorrit

Garry W. Trompf - Calumniation and Payback Theory: Wars of Words in the Breakdown of the Warrior Ethos

John Bunyan - The Pen of a Ready Writer:The Psalms of Myles Coverdale

Carole M. Cusack - The Cultic Milieu in Australia: Deviant Religiosity in the Novels of Carmel Bird

Michael Warren Davis - The Future of the Humanities

Karina Hepner - O Where Are the Sounds? Inviting Poetry Back into the Lives of Learners

Devika Brendon - 'Imagery for the End of the Day' (poem)

Review - The Chinese Martial Code: The Art of War of Sun Tzu, The Precepts of War by Sima Rangju, Wu Zi on the Art of War by A.L. Sadler & Edwin H. Lowe

Nice to receive a recent and kind review by J. Wilson at the 'Martial Thoughts' blog (read it here) (I got 5 out of 5 'Ninja stars'!) of The Chinese Martial Code: The Art of War of Sun Tzu, The Precepts of War by Sima Rangju, Wu Zi on the Art of War by A.L. Sadler & Edwin Lowe, published by Tuttle in 2009! 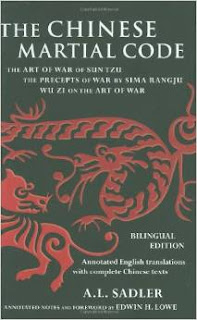 Arthur Sadler is a favourite figure of mine, both intellectually and professionally. Professor of Oriental Studies at the University of Sydney (1922-1948) and concurrent Professor of Japanese (1931-1937) at the Royal Military College, Duntroon (Victoria Barracks, Sydney), Sadler was born in Hackney, London and read Hebrew and Assyrian at St John's College, Oxford and later specialised in Japanese.  A scholar in the classic British mould, he lived and breathed his scholarship, which crossed over into his everyday life.  He built a house, 'Rivenhall' (which I have had the pleasure to have visited - its owner is Sadler's former student) in Warrawee, Sydney, carving it out of the bush in the 1920s. Building it in a unique trans-cultural style, Sadler blended Neo-Georgian and Tudor, and filled it with self styled Jacobean furniture (made in Japan), and personally landscaped it with Italianate water features and Japanese garden, complete with tea house where he and his wife entertained students, and an ornamental gate, disguising the vulgarity of the concrete septic tank.  He was a leading figure in the Australian Japanalia scene, pioneering and popularising the collection of Japanese colour woodblock prints. 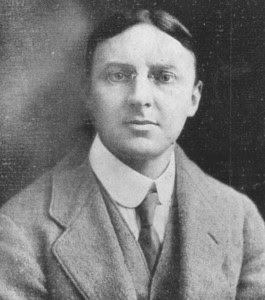 Sadler cut a figure amidst the golden sandstone at the University of Sydney, a dapper, donnish Englishman clad in tweed with a pince-nez - he was built like a rugby player and practised kendo, keeping a suit of samurai armour in his office.  He attended professorial meetings with reluctance and chose to read through the meetings instead, to show his contempt for administration. In his teaching, he considered teaching assistants a nuisance and taught most of the curriculum himself.  In his Japanese language classes, he despised teaching grammar and chose to teach selected readings in depth instead, in order to best learn the language and culture (I love this guy!!). He taught oriental history and his courses were popular amongst specialist and non-specialist students alike, who delighted in his lively and anecdote filled lectures (today, we call this 'engaging'), which students recalled in the years and decades afterwards.

His students were the generation of Japanologist and Orientalists who went off to fight Japan in WWII.  His students served in various intelligence roles, and remembered well Sadler's teaching of his deep understanding of Japanese culture, and what to expect in war with the Japanese. Armed with the knowledge of Japanese militarism and bushido, few of his students were suprised by their experiences in the South West Pacific and  South East Asia.  Denied a military intelligence role during WWII, seemingly due to his Japanese born wife (a British subject and the daughter of a Royal Navy officer), he continued his already pioneering and prolific writing throughout the war. Sadler was a pioneer in what we today call 'strategic culture' and 'conflict ethnography' - understanding the enemy at a fundamental level.  He spent the war translating Japanese and Chinese texts in order to better 'know the enemy', including the probably the first translations of the classical Chinese strategists Wu Qi and Sima Rangju.  He was consultant to the Australian government, regarding the rituals and ceremonies of the military funerals and repatriation of the remains of the Japanese sailors who died in their attack on Sydney Harbour in 1942.

Sadler retired in 1948 and returned to Britain, where he died in 1970.  We can only wonder what Arthur Sadler would have made of the working conditions and demands in the modern Australian university, and how they go about the teaching of foreign languages, cultures and history.  Perhaps he would have taken his kendo sword and sorted the lot of them out?

Posted by Edwin H. Lowe Publishing at 03:52 No comments:

Edwin Lowe speaking at the Australian Defence College, Centre for Defence and Strategic Studies, on the effect of Chinese identity issues as both a driver and limitation of security policy. 26 April 2016 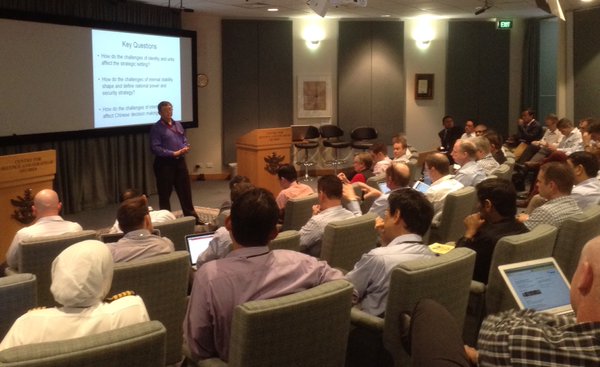